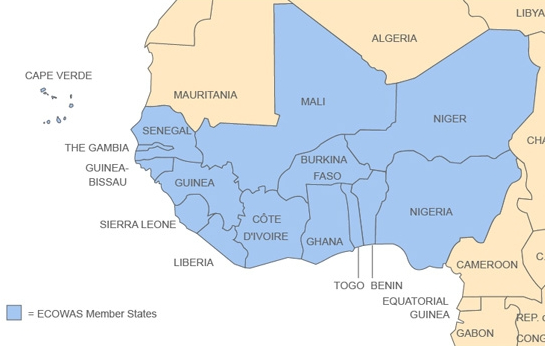 Located in northwestern Africa, Mali is ranked as one of the most unstable countries in the world. In mid 2020, a military junta staged a coup that led them to power. This past Sunday, a group of fourteen other African nations came together to seriously heighten sanctions on the country for its democratic backsliding.1

The fourteen nations that put these sanctions in place make up the Economic Community of West African States, or ECOWAS. Mali is the fifteenth and final member state, but was suspended following the coup. The group was originally designed to facilitate economic development in the region, but has, over time, gained responsibilities.

ECOWAS now facilitates the use of the CFA, the bloc’s currency.2 It has its own parliament proportionally determined by member states’ population.3 Perhaps most striking, however, is that the group can impose sanctions, embargos, and use a joint military force – all with a unified voice.4

On Sunday, they used that voice to promote democracy in a region marred by conflict. A trade embargo was put in place and borders were shut off. The sanctions imposed by the group were enough to elicit a response from the chief of Mali’s military junta by the very next day, who announced that he is ‘open to dialogue’.5 Additionally, the European Union, one of Mali’s largest trading partners, announced that they would follow the bloc’s lead with regards to sanctions.6

Mali’s future, whether as a democracy or autocracy, may not have a meaningful impact on much of anything. The country of roughly twenty million doesn’t have an economy or military that makes it worth fretting over. However, there are many countries with similar stories, stories where democracy gives out or where it has never begun. Belarus, Venezuela, Kazakhstan, North Korea, Myanmar, Guinea: they are all Mali.

In the moment, things may seem unimportant, but it’s important to remember that they are important. While their foreign trade may suffer a little in the short-run, ECOWAS took a stance. A stance that makes it clear democracy is the only option. Mali, and the world, will be better because of it.

All comments are filtered through Scarlet Ink administrators-- use your voice wisely.
All The Scarlet Ink Picks Reader Picks Sort: Newest